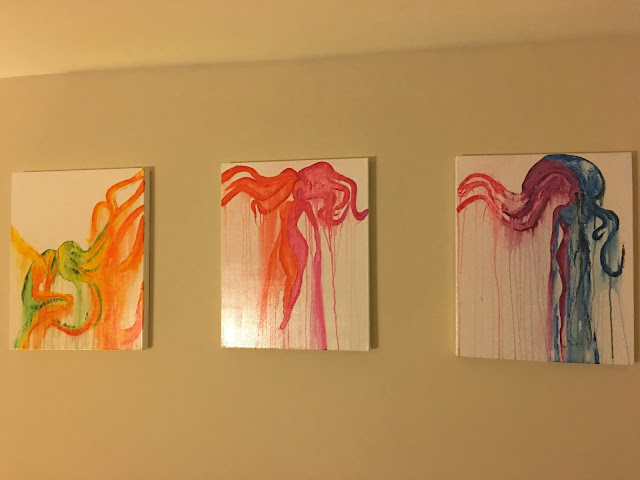 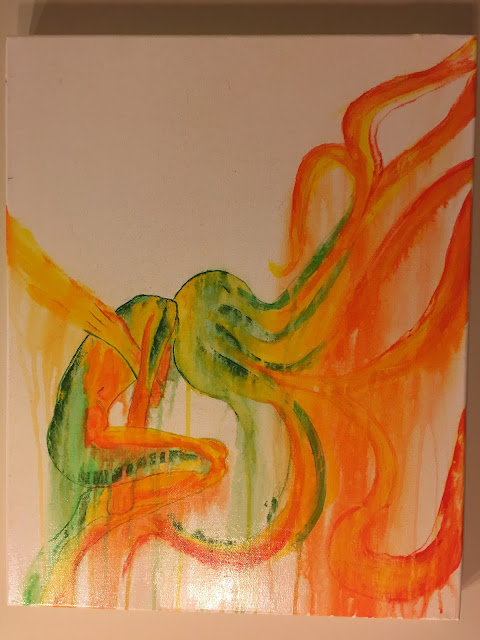 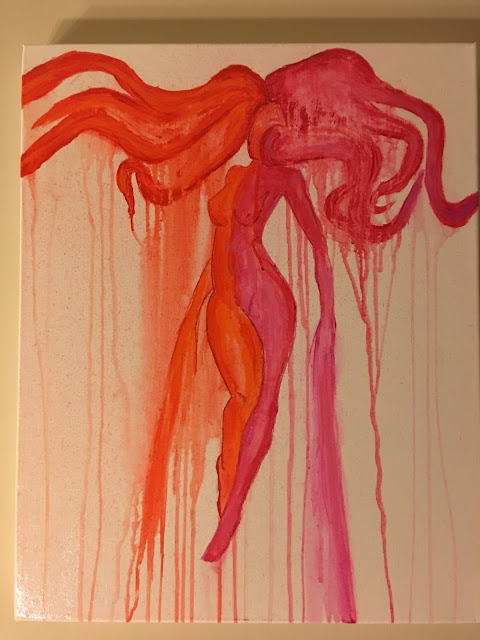 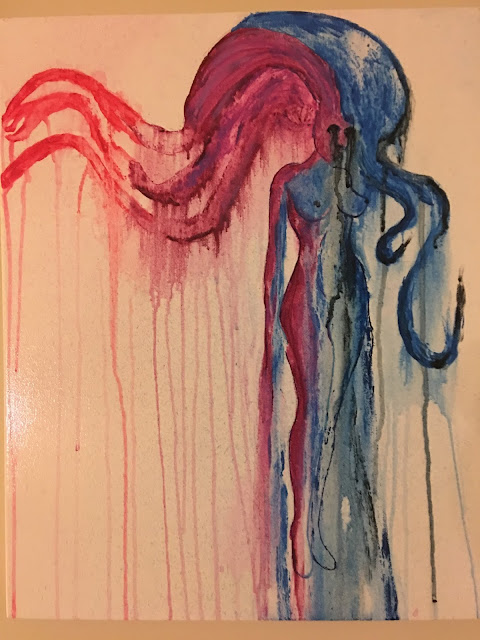 Background: Since most of my work is digital these days it’s been a couple years since I put actual paint to actual canvas. As I was decorating my new apartment I wanted to hang something new, but couldn’t find much I really liked. Finally I just said !@#$ it, and decided to paint something myself.

Influence: I am absolutely horrible at watercolor painting. That doesn’t mean I can’t fake it though, and mimic some of the natural blends that comes with the medium using acrylics instead. My apartment is lined with several works by Lora Zombie a Russian born blue haired muse whose works tend to drip and bleed all over the place like a colorful hemorrhaging heart.

Methods: I blocked out all the forms in Photoshop and drafted how the colors would transition. 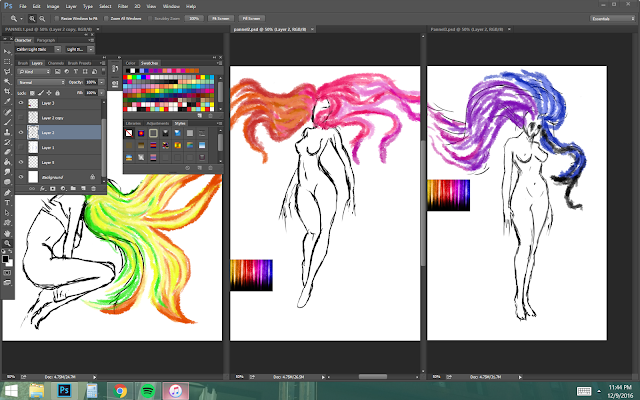 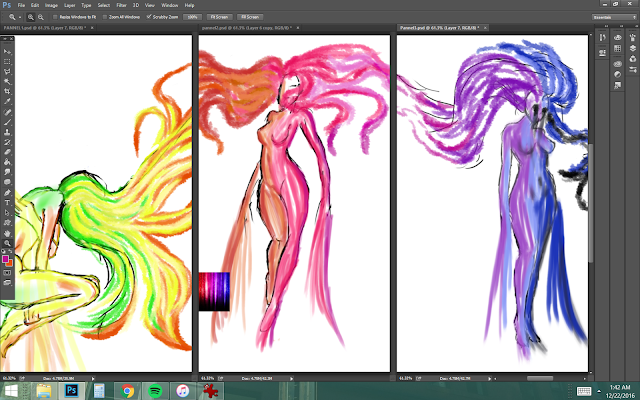 Once I was generally happy with each design I projected the Photoshop image onto each canvas, and lightly traced each form in pencil. This saved me some time/effort rather than recreating the shapes again freehand. It also let me make maximum use of the canvas because I could control how each form would scale and appear depending upon how I moved and resized the projection. 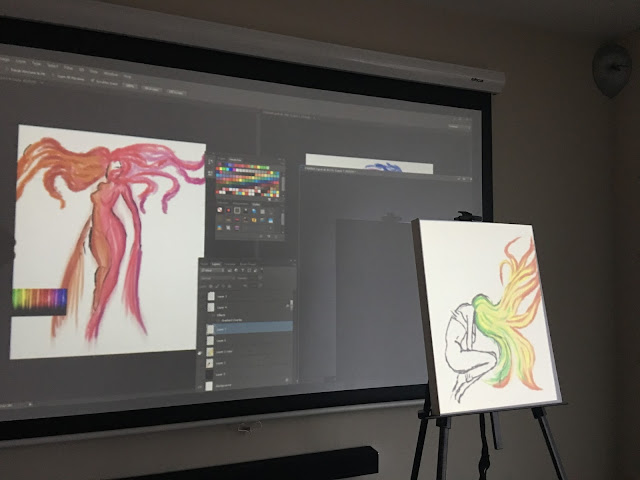 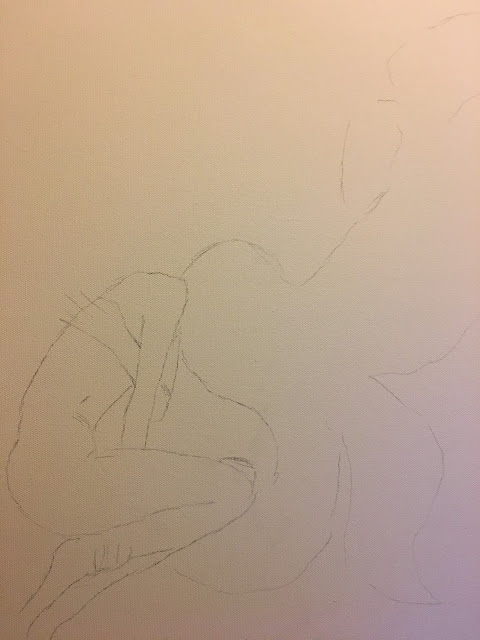 After that I gave the forms a more definitive outline by sketching them with acrylic pens. With the sketches in place I then apply paint mostly working with the darker colors first. Before the paint can dry completely I hit it with a spray bottle and basically just let it drip and splatter all over the place. Even if you overdo it I can go back and fill in more color. Once I’m happy with the color I use a hair drier to accelerate the drying process before adding another layer/color.
The acrylic pen sketches underneath are set, and don’t bleed so the subject never loses it’s shape and I didn’t use them in the hair for the most part because I wanted to keep it as unwieldy as possible.

This is definitely one of the most organic methods of painting I’ve done before because I have no idea how things are going to play out with the unpredictability this much water brings. Regardless I felt I had more control over the direction of the paint with acrylic than I would have with watercolors.

I finished it with several coats of high gloss varnish to make the colors retain their pop. 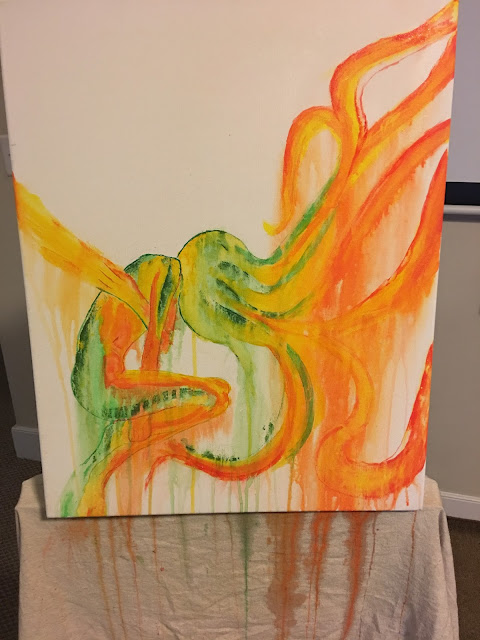 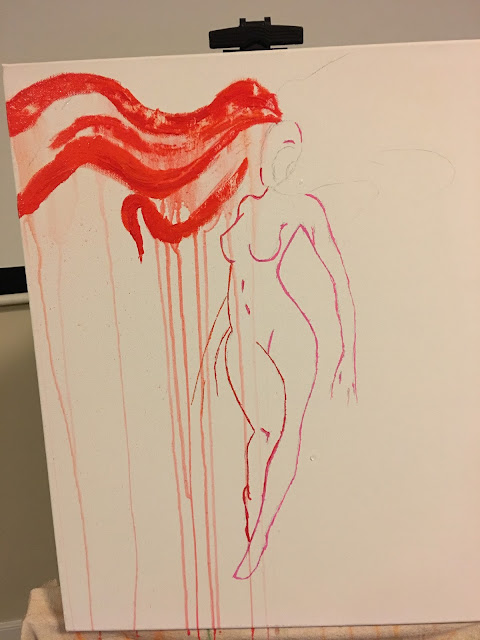 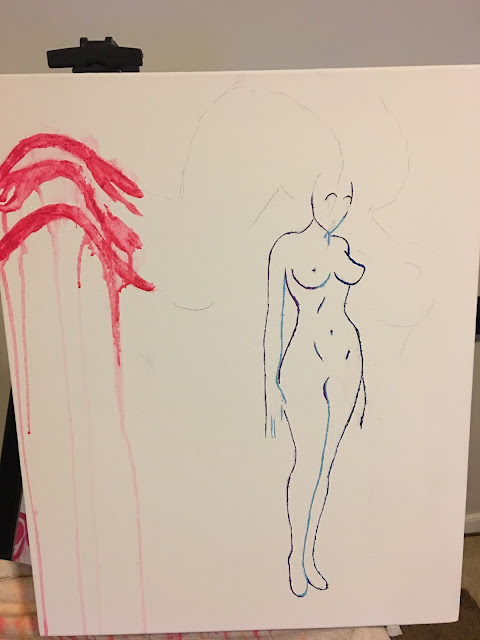 Subject: I wanted to paint vague feminine forms across 3 panels, and not reinvent the wheel. So this particular piece of neopaganism lends itself pretty damn well to the segmented triptych form. So each goddess gets their own panel. 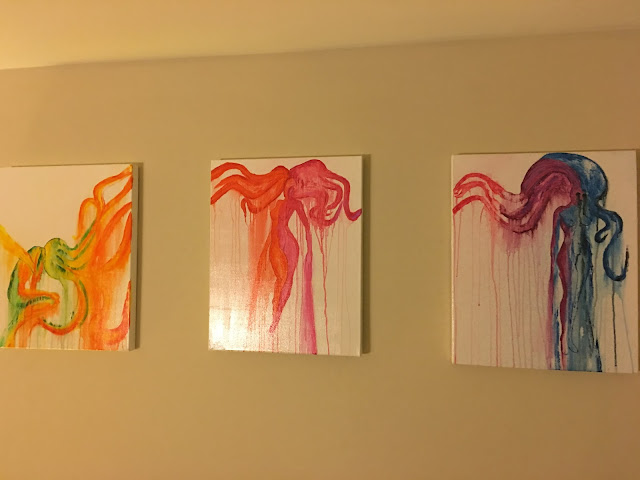 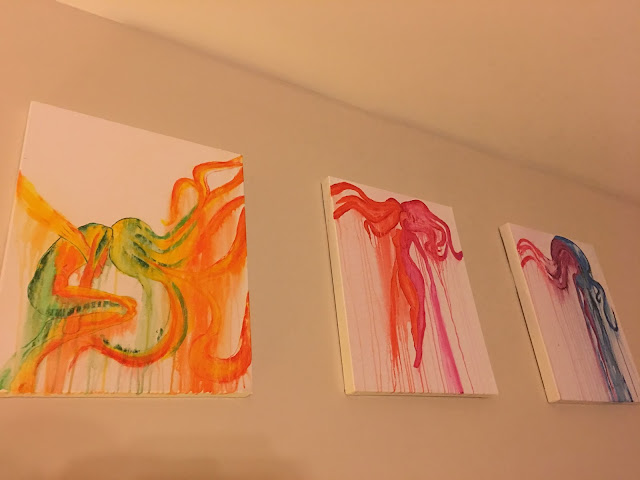 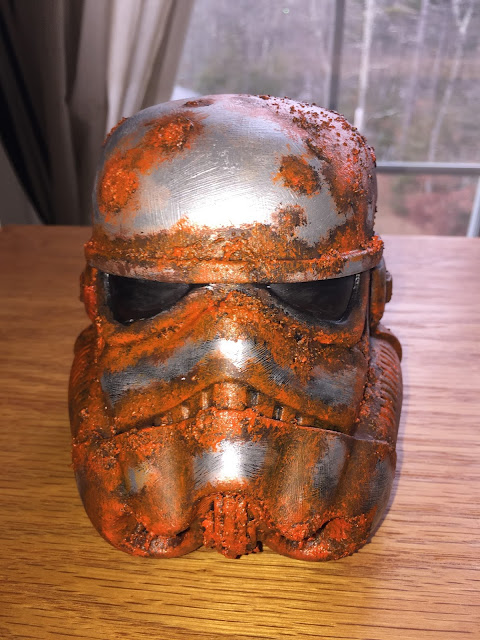 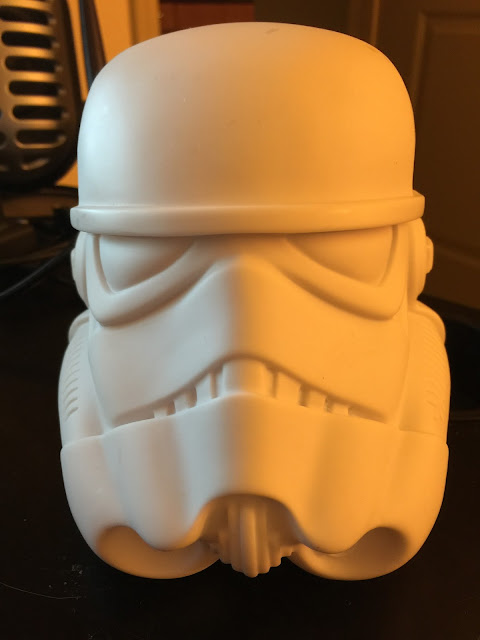 Do not underestimate what you can do with a stock white vinyl figure. These are iconic shapes you can start with to explore your creativity. Here my design was inspired by Star Wars TFA’s Captain Phasma aka Disco Stormtrooper. My thought being what would happen if her shiny pimped out armour had gotten beat all to $#%! like Vader’s helmet. I’ve done a lot of faux metal painting projects in my day, but this is the first time I’ve done a full on rust effect.

I started with a base of black acrylic paint applied with a rough bristled brush so you can see the harsh brush strokes. This will add a wear and tear scratches effect when I apply the metallic coat.

If you’ve read this blog before you know I use a frame antiquing wax compound called Rub n Buff for metal effects. Here I’m using their silver leaf for the body and ebony for the eye lenses. As for application technique this stuff finds its way into every nook and cranny anyway so mostly I just squirt a bunch at the top, put on some nylon gloves, and massage the metal in. Metal wax is good for the pores. 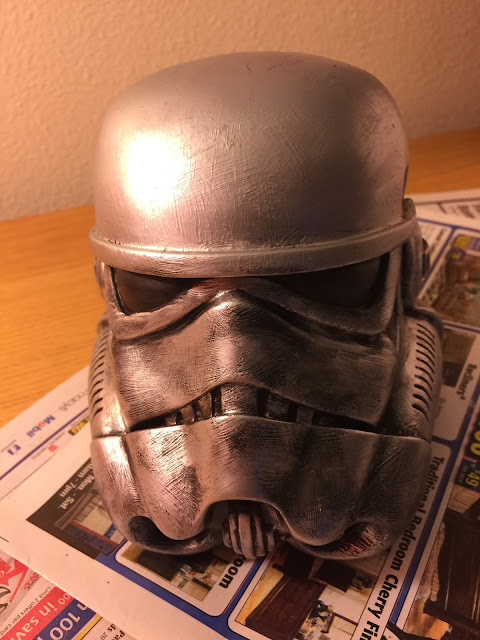 This looks pretty slick on it’s own. But we’re going for a long forgotten/weathered look this round.

You can do effective rust effects with three tones painting in layers as follows: black/dark-dark-brown, muddy middle brown, then flamboyant orange. But hold on space cowboy you can’t just sling some acrylic on this thing expecting it to look like real deal rust. You need grit and determination...well mostly grit. You need to reproduce the texture of oxidization through a stippling brush technique and/or adding actual grit to your paint.

Sure there are plenty of specialized paints that just produce rust effects. But in my art studio we tend to slum it. So adding coffee grinds to the paint mixture it is. 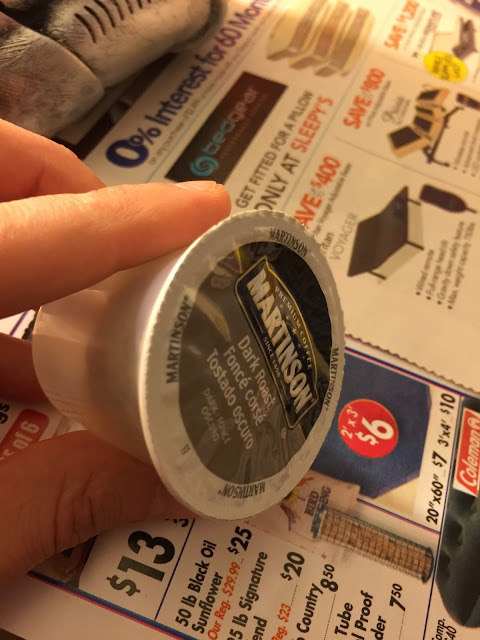 This coffee tasted so bad I almost don’t even want to paint with it.
Made with 100% arabica-ish beans. 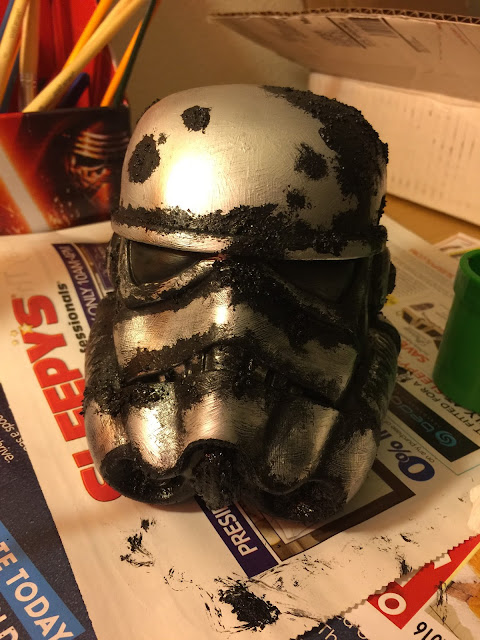 Well you ruined it. Hope you're happy now...

Here I’ve outlined where the majority of the rust is going to be in my French Roast Black paint. It’s important to coat any raised edges and the majority of crevices. The other thing to note is even though the helmet is symmetrical things don’t rust in a perfect mirror image. So no need to be precise. 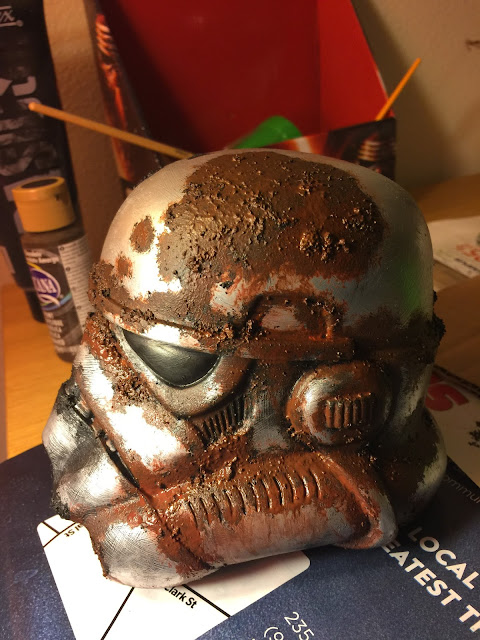 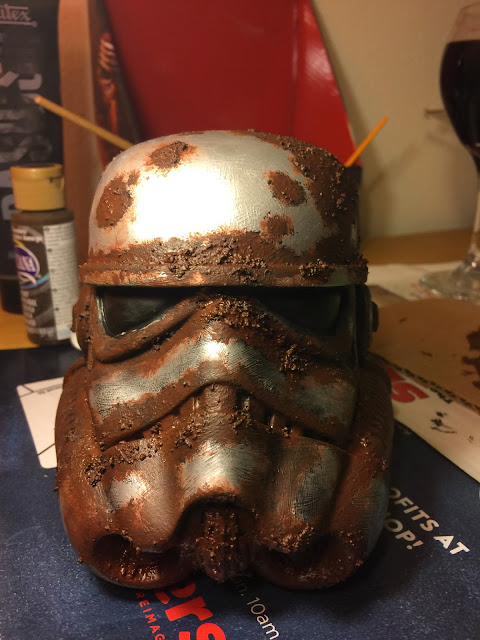 This looks more like a Stormtrooper dropped their helmet in a Space Latrine. Is that corn?

Now for the muddy midtones. Again the Mocha Frappuccino Black color I used is mostly a base/guide for the big time brown which will represent the majority of the rust. I’ve added a little red to it as a stepping stone to meld with the eventual harsh orange I want to finish with as a highlight.

Finally now it's time to go full Florida. Orange! This is really where all the texture pops. 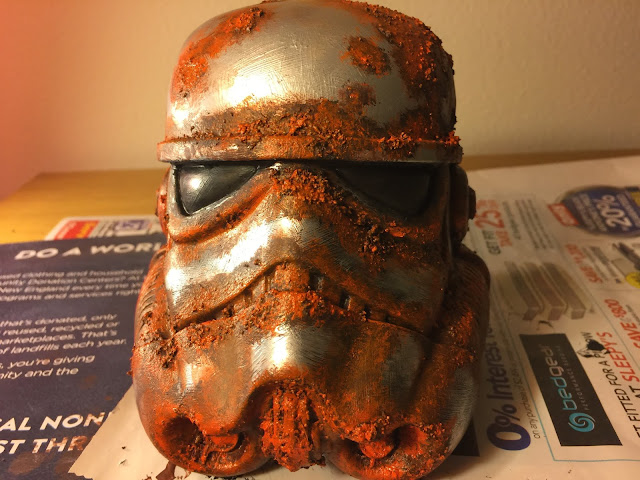 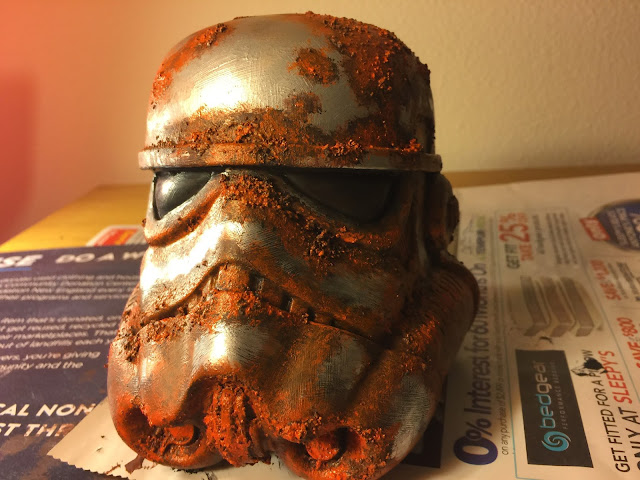 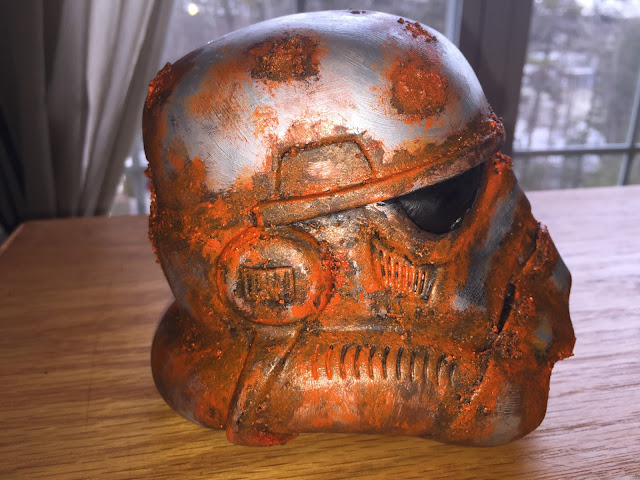 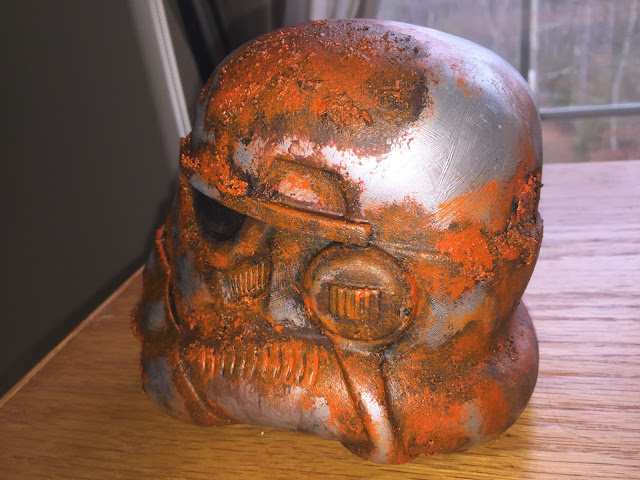 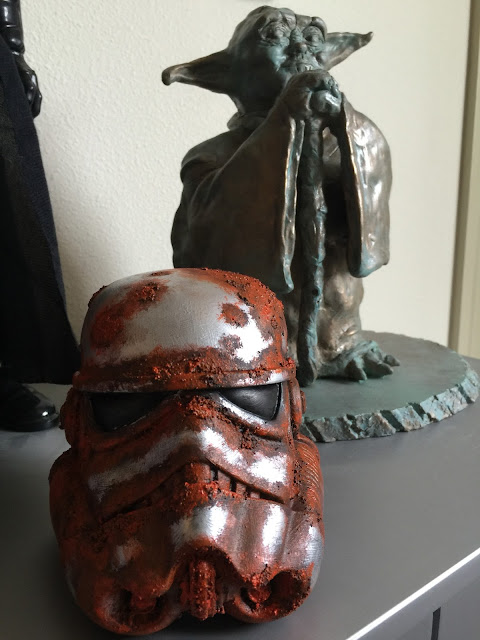