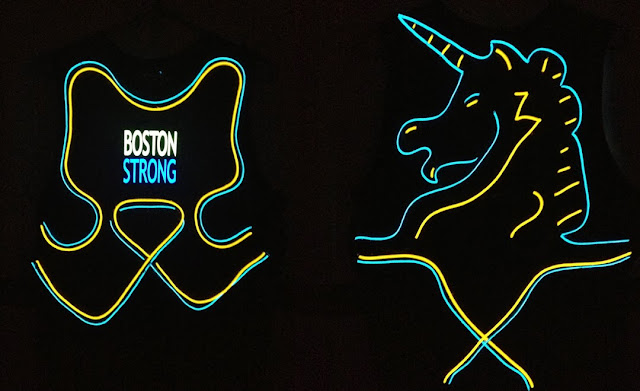 Electric Run came to Gillette stadium, and I knew I had to do something special.  So I started drafting Boston (s)Tron(g) 2.0.  This project took about a month, and really came down to the wire (pun intended) the night before for the finishing touches.

As with most of my projects I start sketching what I intend the final outcome to be.  This design does evolve over time, and is really only meant to be a guideline (rather than an absolute plan) for how I'd like piece to appear. 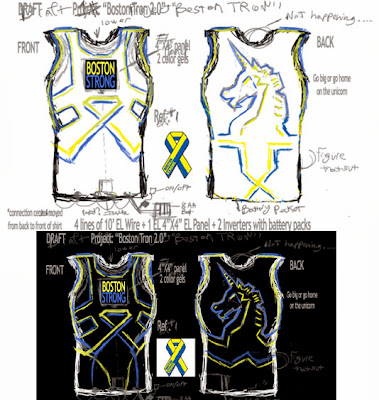 At some point in the design process I knew I wanted to incorporate three things:
Obviously the unicorn was the most difficult design challenge so I started with it first.  This is usually how I work.  Whenever possible I start with the most difficult aspect of a piece.  If I can't nail it...absolutely nail it.  Then I know I can't continue on.  I wasn't going to settle for some misshapen "bluricorn".  I needed people to look at and  recognize it instantly with out a doubt.

History:
The unicorn has been the symbol of the Boston Athletic Association since 1890, and this rare mythological beast has come to represent everything that is truly remarkable about the Boston Marathon. 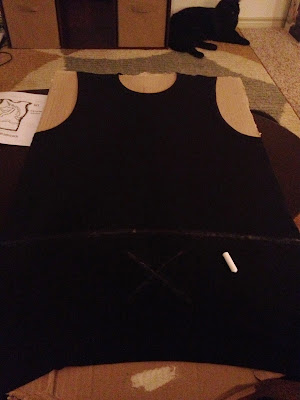 Unfortunately the cardboard cut out I use in place of my own physique when
designing these things is far more impressive...

I estimated using about 40 feet of electroluminecent wire.  In reality I only needed a little over 38 or so.  I get a lot of my supplies from elwirepros.com.  They offer a lot of pre-built kits.  So even if you're not great at soldering electronics many of their product offerings are ready to light up and go. 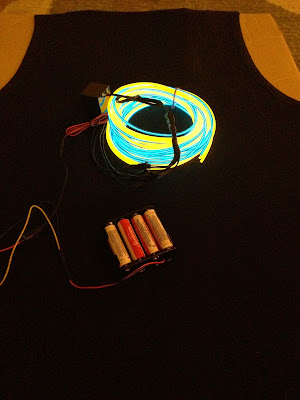 I start by outlining my waistline, and key points of the design in chalk (blue and yellow in this case). Again these are only guidelines.  As I start putting wire to shirt the bends and curves may alter things. 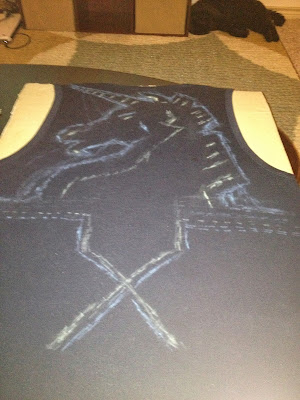 Oh sure it looks great in theory, but in reality at this point I
have no idea if I can actually make this work.

Tips on how to work with EL wire:
Hiding wire: 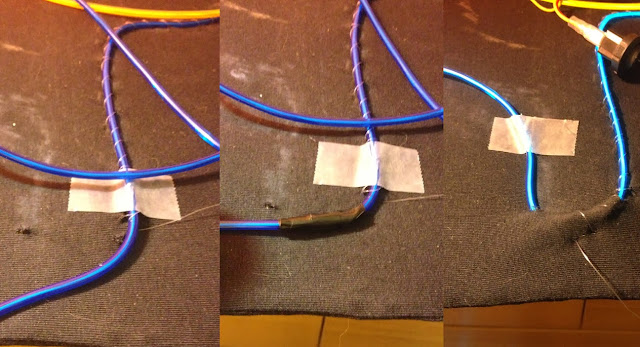 You need to keep the current flowing through the wire in one continuous length, but your design may call for sections of empty space, or you may need the wire to transition to a different part of the shirt so it can start a new design. 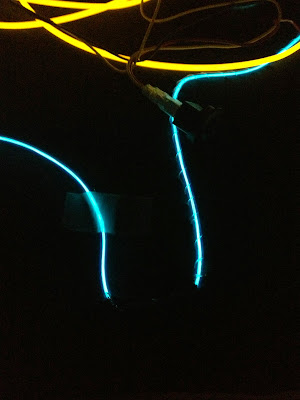 Not bad
Faking sharp angles:
No one has ever heard of a "safety" unicorn.  So no blunt end at the end of the spire of the horn.  But bending the wire risks breaking it.  So we loop or gently cross sections of wire over itself and hide the loop under the shirt covered in electrical tape. 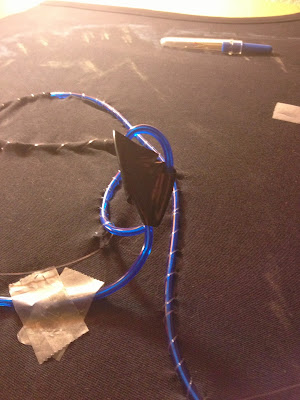 This is actually the chin section but we're going to: 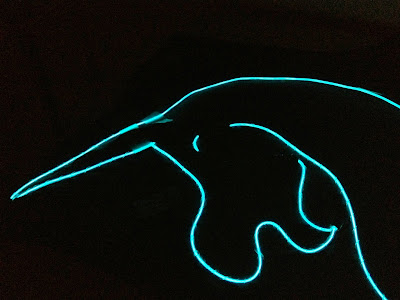 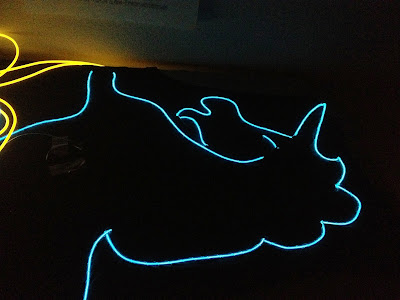 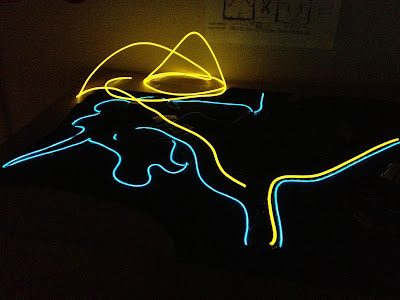 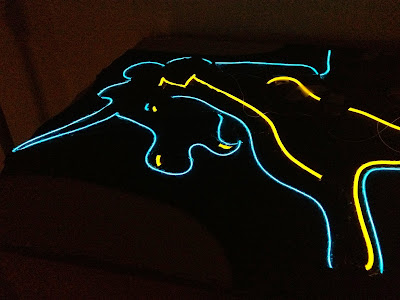 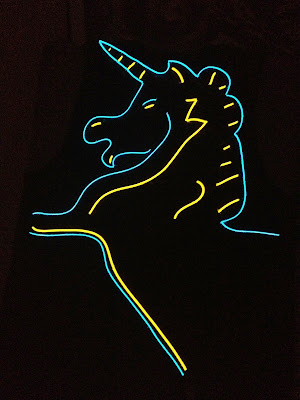 This is two lengths of EL wire about 10ft each.
There's a lot of looping around going on under there with the yellow.

After that the front of the shirt seems easy by comparison: 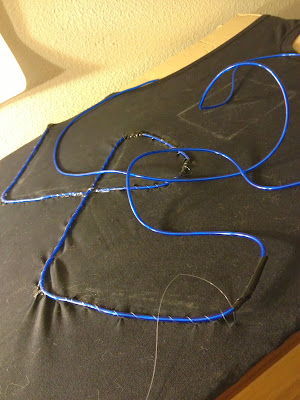 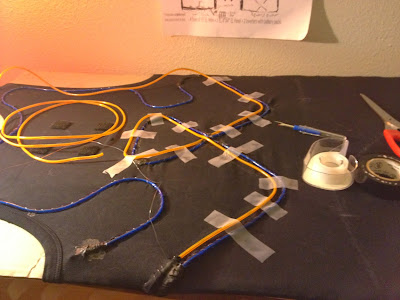 Scotch tape is your friend

EL Panels are made out of the same material as EL Wire just flattened out.  They usually come in a 4"X4" square, and are available in various colors.  They require more power than EL Wire so I usually run a panel like this on it's own battery source.

To make this particular panel work I: 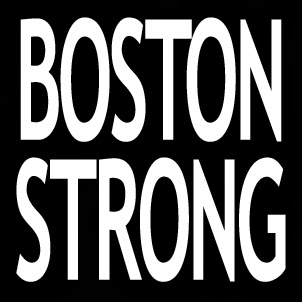 Pro Tip: Do not use a cyanoacrylate based glue aka most "super" or "krazy" glues.  It'll eat through the color in the gel, and cause it to bleed.  Found this one out the hard way...  A normal white glue that dries clear should work just fine. 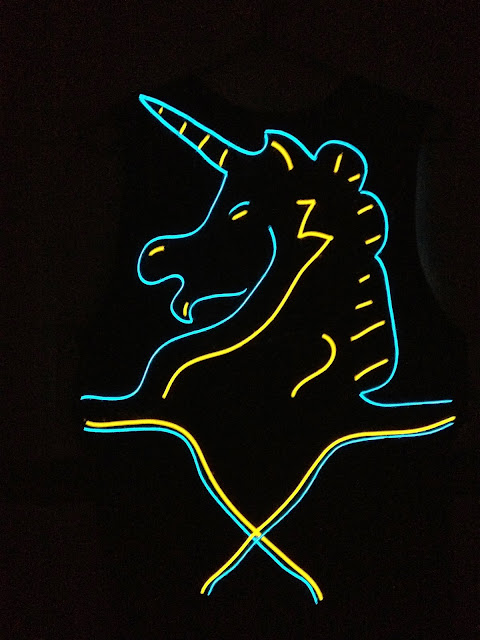 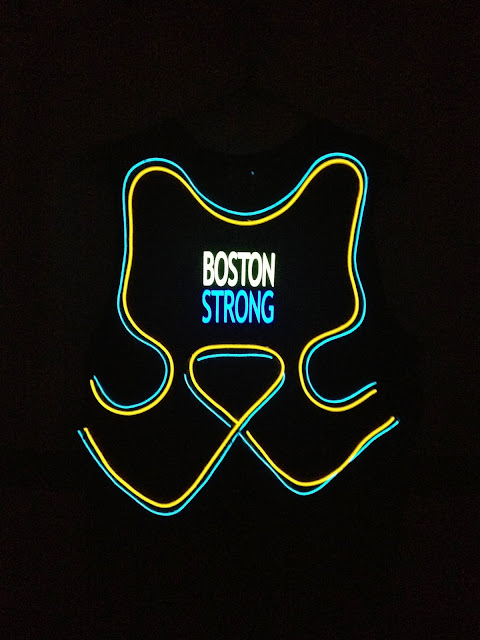 Other notes about this project:
Posted by Kawfi at 5:42 PM 1 comment:

I'm doing some night/glow runs in the Boston area and thought I should make some additions to my running shirt using an EL Panel.

An EL panel is a flat piece of luminescent material about 4"X4". If you print a negative image on a sheet of acetate (basically one of those old transparency sheets they used to use for overhead projectors) and glue it to the panel you can block out sections of the light to make a design.  The panel is then attached to the shirt using Velcro.

Still running. Even if times seem dark.
Posted by Kawfi at 6:29 PM No comments: