I'm only a few days away from running in the Twilight Zone Tower of Terror 10 mile road race down in Disney World Florida and since it's at night and "costumes are encouraged" I'll be wearing a Tron inspired running shirt consisting of 30 feet of electroluminecent wire. 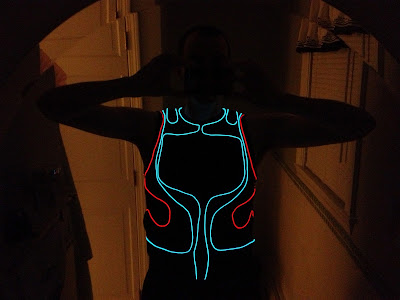 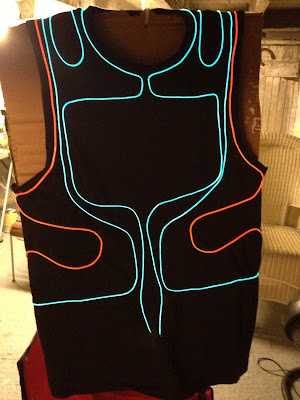 Even shows up pretty well with the lights on. 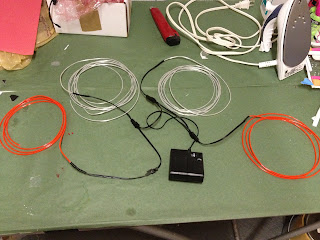 There are 4 separate EL wire lines in this costume: two ten foot blue wires, and two five foot "flame red" wires.  All four lines feed into one sleek small power source juiced by a 9v battery.  Much...much lighter than the 8 AA monstrosity I had wired up for the hoodie. 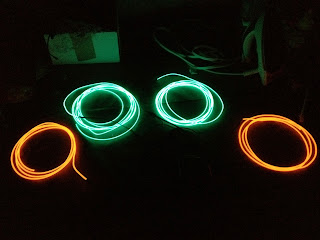 After checking multiple manufacturers I can't find honest to god true "red" EL Wire.   Everyone that calls their brand "red" is actually more of an orange red, a pinkish red, or a purplish red . Some sites even had their photos doctored to make it look more red and less what I've seen more honestly marketed as "flame red".  All that said EL wire is actually becoming more and more common.  You can but it at a local party needs store like iParty now all hooked up to a battery pack and ready to go.

I buy these cheap muscle shirts at Sears for various running shirt projects.  It turns out they don't actually guarantee you'll add muscle when you put them on.  I think it's false advertising personally. 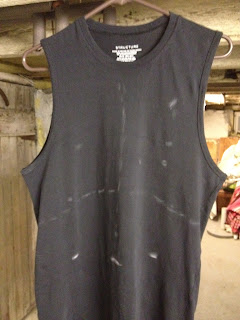 If I had more time I'd do some basting, or essentially loosely "pre-sew" the wire to the fabric.  Instead Scotch tape and a bunch of string I'm using as a guide will have to do.  I also mark up some vital points in chalk. 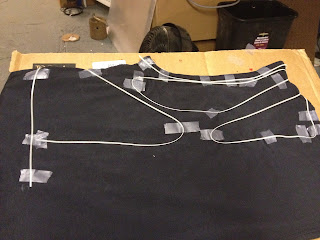 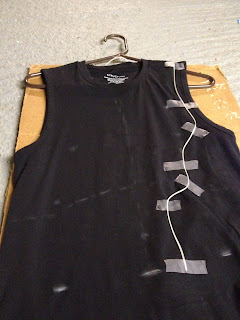 The giant gap in the center is where my running bib number will go.  Originally I wanted to put an EL panel with a running design in it (basically a thinner/flatter version of EL wire that you see in the picture there) but apparently the rules for the race state that I have to have the bib number at the center of my chest and not on my shorts or lower torso.  I could maybe get away with it, but I'm  probably already going to stand out enough in this outfit. 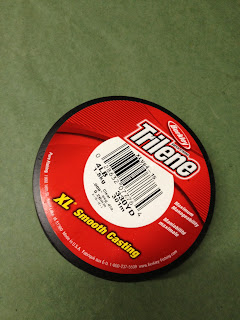 Previously I used 2lb tensions fishing line for my glowing hoodie project.  This time I upgraded to 4lb.  I noticed even though I used the same brand it had a habit of tangling up more frequently.  With thickness and strength you sometimes sacrifice flexibility. 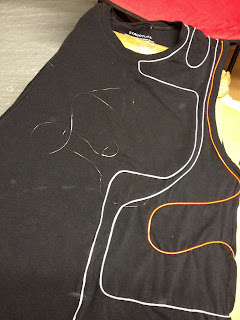 I use a curved needle most of the time. From what I understand curved needles are usually reserved for stitching upholstery, or fixing quilts.  Personally I just find it easier to use. 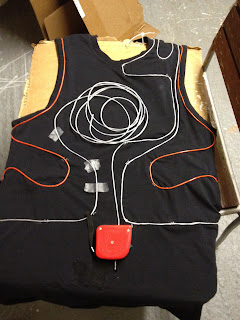 I sew like a blind nun with arthritis using a rusty fishing hook.  So I've reinforced some parts of the wire to the shirt with textile glue.  I don't like the fact that the glue dries a bit shiny, but I wanted to give my self a little extra insurance since I'm going to moving around quite a bit in this thing. 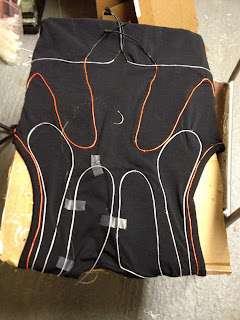 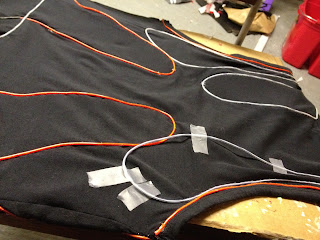 My design does loop from the front to the back a couple times.  Just trying to get the most out of the two continuous 10ft feeds of blue wire. 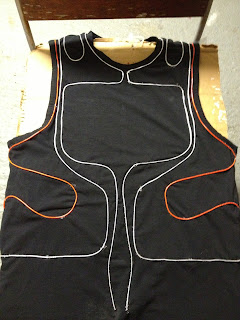 Even though I did take measurements from the seams to the wires I'm not too worried about it being perfectly symmetrical. Namely because the wire will naturally warp to how the fabric moves with the rest of my body.  Also the whole thing is pretty flexible so I can tweak the corners and bends a bit after the fact even if they're glued and sewed in place. 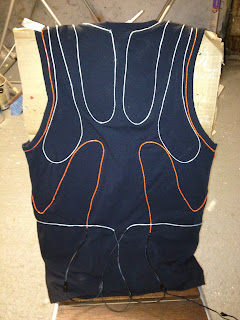 The 4 connectors all loop together in the back and feed into one wire which then goes to the 9v power source. 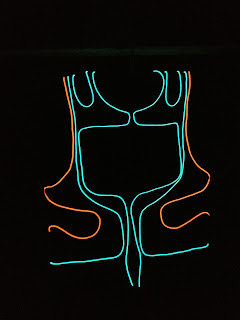 Unfortunately it's a little tight around the neck so I have to dislocate my shoulder like Mel Gibson in Lethal Weapon to put it on.  Once on it fits great though and should be comfortable to run in. 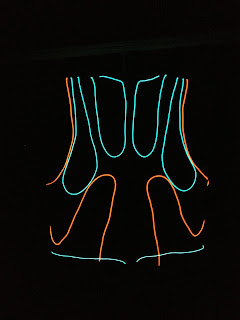 That little bit of red that's crossing under the blue is nothing a little electrical tape can't fix.

Project: Power Hoodie to the People

Project: Power Hoodie to the People 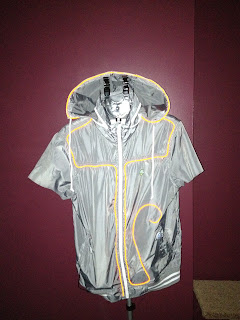 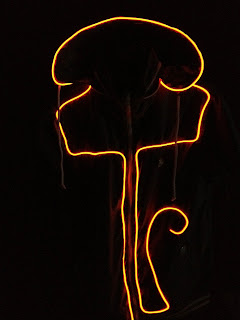 It's tough to take a clear picture of something that's supposed to glow in the dark.  Between this and Halloween pumpkins cameras have a hard time capturing the feel of it. 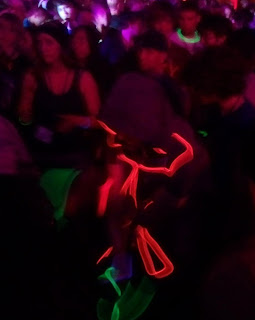 Again not the best quality but you get the bright idea

What is it? :  An Electric Power Hoodie

Hardest part of the process :
Sewing the wire into the actual hood part of the hoodie because it’s looser than the rest of the garment.  Also I hate sewing in general.
Uses : No one’s going to miss you jogging at night with this thing on.  Also really freaks people out on a dance floor in sound activated mode.
Washable/Waterproof? :  Can’t exactly throw this thing in with a load of darks... It can handle sweat but I probably wouldn’t push it in the rain.  Wash with care.
What I learned in retrospect :
I used 2lb test fishing line to secure the EL wire to the hoodie because it’s thin, strong, and translucent.  So far it’s held together very well, and chances are the thread strength is probably more than enough.  Even so I’d probably upgrade to the 4lb strength line next time even if it’s overkill.  They also make a “clear/invisible thread” for craft sewing purposes but I can’t speak to how strong it is.  It depends on the item you’re attaching the wire to, and if you’re just going to be lounging around in this thing, or thrashing around like a fish I guess.

The manufacture called the color “fiery red” which glows mostly red with an orange tint.  Not bad looking, but not quite what I was looking for either.   I’ll probably look for just straight up “red” hold the “fire” next time.

The AA battery power source is serviceable but too bulky.  I need to figure out if I can wire it up to some watch batteries instead, or find a kit with a more streamlined battery holder.  There’s other options out there.

I’m still no good at sewing.  In a perfect world you’d open up the seams in the garment and actually embed the wire in the cloth for a more secure fit.  What I’ve done here mostly is secured the wire to the seams instead.  Effective but not as clean.

Recommendations to folks who want to try similar EL Wire projects :
Don’t be put off by electronics.  I solder about as well as I sew (which is to say I suck at that too).  So there’s plenty of kits and options out there that come with things pretty much pre-assembled.  You’ll pay a little more for the service obviously, but it might be worth the professional job.  Your fingers will be less burned as well.

From everything I’ve read if you’re adding EL Wire to clothing I don’t recommend placing the wire on anything that runs across a joint. ie running wire the full length of a sleeve across the elbow or down a pant leg across the knee.  EL Wire is very flexible but if you keep bending it back and forth the copper wire in the tubing could snap then anything beyond the break will go dark.  Like Christmas lights one goes out they all go out.

If you really want to use the sound sensor as part of the effect be aware it usually comes with a sensitivity switch, knob, or slider that you need to use to gauge how much it blinks in time with the music.  This depends on how loud the music is, and how close you are to the sound source.  In other words if you’re at a party or a dance be prepared to babysit it the whole night if you want it to blink properly.  Too sensitive and it just stays on 99% of the time.  Not sensitive enough and it will stay dark.

When trying to figure out how much EL wire you’ll need to accomplish your design cut a measured length of twine or string first then tape it to the garment.  You can even leave it on there and use it as a guide while sewing.

Aside from EL wire if you’re looking for something even more Tron-like they do make EL - Panels (squares and rectangles that glow) and EL - Tape (looks like battery powered Scotch tape). Both are flat, flexible and have more surface area so they’re more comparable to the outfits you see in the latest film.  I made a belt out of some EL- Tape that looks good.

Next light up project :
I’m signed up for a 10 mile night run at Disney World where “costumes are encouraged”.  So I’ve been drawing up plans for a glowing running outfit.  The challenge is to make it comfortable enough to run in with out damaging any of the equipment or holding me back and affecting my speed.